Q & A W/ Robert Parry, Author of "Elizabeth: The Virgin Queen & The Men Who Loved Her"

This week I finished Robert Parry's "Elizabeth: The Virgin Queen & The Men Who Loved Her".  I wrote a short review in my last post and with that, I highly recommend this book.  Robert & I thought it would be a great for a Q & A.  Below are questions that I asked Robert.  Much appreciation for his time with this Q&A.  In addition, Robert is so graciosully proving a free book to one of my Facebook followers.
***Within the next day or so, there will be a question posted on my FB page, https://www.facebook.com/thetudorspage.  All one has to do is answer the question and they will be entered for the free giveaway of Mr. Parry's book.  More to come over the weekend.***

Enjoy The Q & A With Mr. Robert Parry 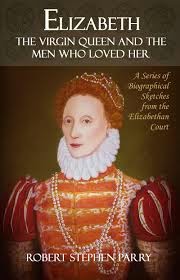 Question: What is your most recent book, "Elizabeth: The Virgin Queen & The Men Who Loved Her" about?

Answer: It is a memoir concerning a gentleman who attended an unusual series of lectures on Queen Elizabeth I of England on a country retreat at some unspecified time in the recent past. He describes the lectures, along with the location in which they took place - a series of biographical sketches on the men in Elizabeth’s life interspersed with fictional vignettes.

Question: What inspired you to write "Elizabeth: The Virgin Queen & The Men Who Loved Her"?

Answer: I have always had an abiding interest in the Tudor and Elizabethan era, and one of my all time favourite heroines is Elizabeth herself.

Question: What is your opinion of Elizabeth I?

Answer: I believe she was one of the most unusual, interesting and talented women in history. Simple as that.  For a single woman in a man’s world to succeed in governing a country for nigh-on 45 years would be considered a impressive feat in any age, including our own, but in the 16th Century it was nothing short of miraculous.

Question: This is mentioned in the book but do you believe Elizabeth I was a Virgin?

Answer: My feelings on this hotly debated topic have wavered over the years. When I wrote my first novel ‘Virgin and the Crab’ way back in the nineties (published 2009) I tended towards the doubtful and dubious side of things. These days, however, it seems more and more likely to me that she was indeed a virgin queen as we would define the term today. I’d like to think that the reader of this latest book will come away feeling that this is, indeed, perfectly plausible.

Question: Which part of the book, "Elizabeth: The Virgin Queen & The Men Who Loved Her", did you most enjoy writing?

Answer: Oh, probably the fictional vignettes. I am not an historian, and so the biographical elements are really nothing out of the ordinary. It is the fictional episodes that make it come alive and give it the sparkle. It is that vitality and energy of the Elizabethan age that, above all, I wanted to convey.

Question: What is it about the Tudor era that fascinates you?

Answer: The simplicity of things – that things were governed by expediency and common sense, combined with the application of faith in all areas of life. There was a great spirit of adventure, and the English language climbed towards its peak of excellence culminating in the works of Shakespeare. The fashions were pretty cool, as well.

Question: How did you narrow down the men who loved Elizabeth I?

Answer: That was basically a matter of drawing on the history books and what they tell us. We know pretty well who she associated with, and especially those with whom she came in contact with on an almost daily basis, her closest companions and devotees. They were the important ones.

Question: How can someone purchase "Elizabeth: The Virgin Queen & The Men Who Loved Her"?

Question: What other novels have you written?

Answer:
2014 'ELIZABETH - The Virgin Queen and the Men who Loved Her.'
2013 'WILDISH - A Story Concerning Different Kinds of Love'
2011 'THE ARROW CHEST - A Victorian Mystery'
2009 'VIRGIN AND THE CRAB - Sketches, Fables and Mysteries from the Early Life of John Dee and Elizabeth Tudor'

Question: Is there another book in the works?
Answer: Yes indeed. I hope to be able to release my next full-length novel early in 2015. The title is ‘The Hours Before.’ and it is set in the world of the European Belle Époque, just at the close of the Victorian age and the beginning of the Edwardian. Anyone who is interested can keep up with developments on my Facebook page. https://www.facebook.com/robert.stephen.parry  See you there maybe!
Posted by Anthony Paradiso at 9:35 PM