What would Henry VIII say to Elizabeth I if alive in person today? 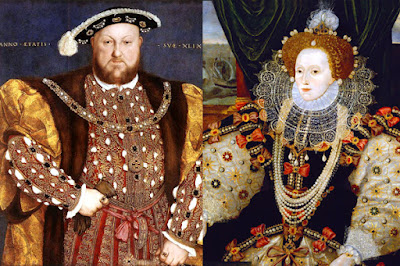 My answer to the question: what would Henry VIII say to Elizabeth I if alive in person today?
My dear daughter Elizabeth, where do I start. Thank you for continuing the Tudor dynasty with such grace and dignity. I am so proud that you are my daughter. Your Mom would be so proud too. With that said, I must give you some advice from one King to another. Yes, my daughter you are a King; you act as King and a Queen. You must have an heir to continue the Tudor dynasty. Marry someone strong and have an heir, very shortly. My Elizabeth, you must do this for the Tudor family, for your Grandfather, me, and your Mom."  He ends the conversation and he goes to her to kiss her on the forehead and afterwards they both bow, as equals.

Posted by Anthony Paradiso at 4:52 PM

I have thought about this for some time. Like 25 years. Firstly, Lizzy is a huge dog. How big will she get?
Sorry off topic.
I think Henry would be so upset over the hash Edward made of his reign he would be livid, and heartbroken that his "boy" died, and Elizabeth reigned supreme. He would not like to be reminded of Anne. Any pride in Elizabeth would ultimately cause him to remember Anne, and that would lead to guilt. I don't think Henry did guilt. Saying that, neither did Elizabeth. They were so uniquely alike in temperment, personal gifts and intelligence, that he would ultimately see that, and be proud. But it would be about him, not her. He would like her gift of propaganda, her use of regal bearing, and her use of marriage, or non marriage in her foreign diplomacy. Henry could only parley between France and Spain through his diplomats and treaties. Elizabeth had a unique diplomacy she used by offering her hand in marriage, but then breaking the treaty or in her case, the promise of betrothal. She learned never to promise to a man she had not met in person. Henry was certainly an influence here, when he married Anne of Cleves. Perhaps Elizabeth was afraid to marry as the only recourse she would have was to behead her husband. She had to ultimately resort to this with Marie, who wanted to gain her throne. Then of course there was the problem of childbirth. Too messy. If Henry was proud of her, it would be an admission of all the mistakes he made. But If we are talking about him seeing her after he was dead, then he certainly would have been thrilled by the personal success of her reign, yet still upset that in the end, it was the end of the Tudor monarchs giving way to the Scottish line, which he tried to prevent through his will. His "boy" changed the line of succession, and messed things up.

She is currently 9 pounds. She will get to about 20-25 pnds. The picture posted on this site wasn't the best picture, it makes her look pudgy, LOL.
Great comment to the post!!