Elizabeth III w/ Cate Blanchett is in the works!

SHEKHAR KAPUR HELMS "LONDON FIELDS" AND ANNOUNCES WORK ON "ELIZABETH III"! TOM HANKS "IN THE GARDEN OF BEASTS"! ZAC EFRON IS "THE LUCKY ONE" 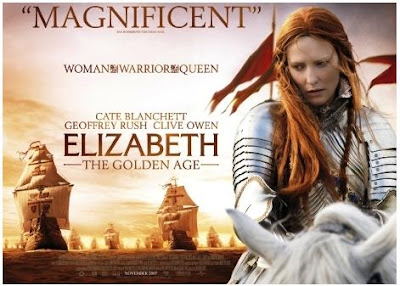 One of my three most favorite directors in the world, Shekhar Kapur (who brought us three legendary, flawless, deeply moving and stunning epic dramas ELIZABETH, ELIZABETH THE GOLDEN
AGE and THE FOUR FEATHERS) is returning behind the helm after a very long break. According to "The Hollywood Reporter" he will take the director's chair of LONDON FIELDS from equally fantastic Michael Winterbottom. This is basically a movie adaptation of Martin Amis' novel which is narrated by an American writer, Samson Young, living in London who has had writer's block for 20 years and is now terminally ill while other main characters include a psychic woman, Nicola Six, who meets two men in a bar and senses that one of them will murder her on her 35th birthday. But the main piece of news, which made HOLLYWOOD SPY's heart beat a bit faster :), is that Shekhar is apparently also working on the preparations for the third installment of ELIZABETH, the best historical saga in cinematic history with the unbeatable performance by Cate Blanchett!

Posted by Anthony Paradiso at 12:19 AM

isn't it an exciting piece of news! I'm dying to see Shekhar and Blanchett work together again!

Thanks for joining the site. I, too am looking forward to it. When I saw this piece of news, I was so excited. We shall see how it is. I wonder when it is coming out.

In any event, check out the site and feel free to comment as you please.

I am truly looking forward to this! Of course I shall add it to my collection of all things Tudor! I really enjoyed the first 2! I am so pleased they are continuing the story!

Kimberly, I couldn't agree with you more. I am psyched about the 3rd movie news. Do you know when it is coming out?

i must thank you for the efforts you've put in penning this blog. excellent blog post .

Good day. I was very impressed with your wonderful article. I hope you can write more and inspire a lot of people . You can also visit my site if you have time. Thank you and Bless you always.

Thank you for the kind words, much appreciated.
Feel free to check out my Facebook Tudor page which I post on a regular basis, at least once a week. The page is https://www.facebook.com/thetudorspage.
Thank you.


I love surfing and blogging. Thanks for your blogs, I have now another idea what to do on my own blogs. Keep it up. I'll come back later to read more post from you. Thank you.

I really enjoyed reading your article. I found this as an informative and interesting post, so i think it is very useful and knowledgeable. I would like to thank you for the effort you have made in writing this article.

There are actually loads of details like that to take into consideration. That may be a nice level to deliver up. I offer the ideas above as normal inspiration however clearly there are questions just like the one you convey up where a very powerful factor shall be working in honest good faith. I don?t know if greatest practices have emerged round things like that, but I am certain that your job is clearly identified as a good game. Both boys and girls really feel the impression of only a second’s pleasure, for the rest of their lives. mgm online casino