HenryVIII-Tell me how I'm supposed to breathe with no heir 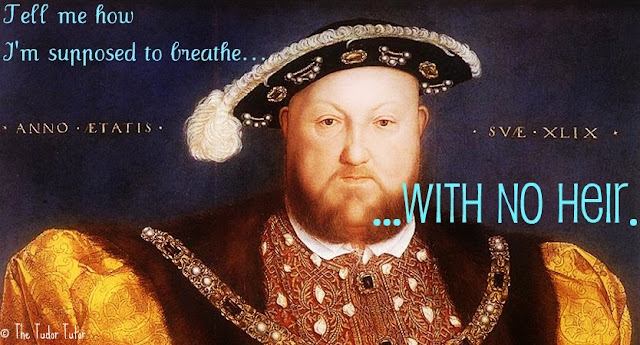 This image came from a follower on Facebook, her FB page is Tudor Tutor and the blog site is,

The picture illlustrates it all.  Everything Henry VIII and his first 3 wives went through during their marriages all had to deal with producing a Son.  If Catherine of Aragon produced a son, he would have remained married to her.  However, she could not produce a son.  Henry abandoned the Catholic Church as the Church would not allow him to annul his marriage from Catherine.  He created the Church of England and had his marriage with Catherine annulled so he could marry Anne Boleyn.  After a few years, Anne Boleyn cannot produce a son, so he has her executed under false accusations.  Finally the 3rd wife, Jane Seymour, produces his son, Edward that he always wanted and unfortunately she died because of childbirth.  Edward eventually became King but dies at an early age.

A lot occurred so Henry VIII could have his son.

Isn't ironic that his 2nd child, Elizabeth I, who was the daughter to Anne Boleyn was one of the greatest Queen's to rule in History.  In my opinion, England prospered much more from Elizabeth as Queen then Henry as King.  Very Ironic, not Edward, but Elizabeth- a female.


Posted by Anthony Paradiso at 9:43 PM